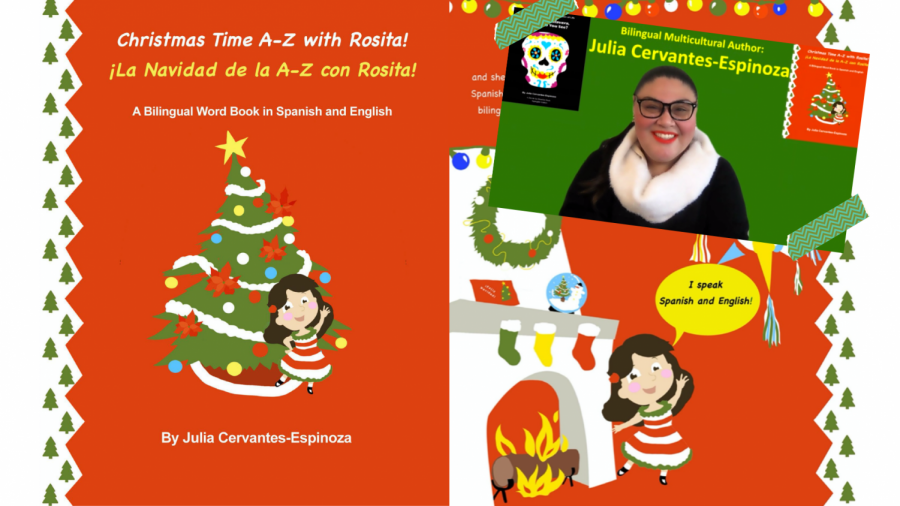 MEET THE AUTHOR - Julia Cervantes-Espinoza’s second book “Christmas Time A-Z con Rosita!” is the perfect gift for families this holiday season. “My goal was to publish two books by the end of the year. I wanted to capitalize on all the learning from my experience with writing my first book,” Cervantes-Espinoza said.

With the holiday season right around the corner, Cervantes-Espinoza’s second book “Christmas Time A-Z con Rosita!” is the perfect gift for families. However, it is not your traditional Christmas holiday story; it is a fascinating bilingual word book in both Spanish and English.

The book opens with a sweet dedication to not only Cervantes-Espinozas’ daughter and husband, but to all the bilingual students she has had throughout her years in education. This is then followed by a picture of a little girl named Rosita.

Rosita is the main character in the book who takes the reader along with her during Christmas Eve as she navigates throughout the alphabet reading Christmas words from A-Z. The book has English and Spanish translations for popular Christmas items and terms such as “the carolers/los villancicos” and “the elves/los duendes.”

The process to write Cervantes-Espinoza’s first book, “Calavera, Calavera, What Do You See?: The Day of the Dead: A Celebration of Life” started in early September of 2019 as she began to reach out to artists through a platform called Upwork. Through the platform, she found an Italian illustrator based in Mexico City, Francesco Orazzini, who brought her vision to life with his illustrations. It only took three weeks for Cervantes-Espinoza to write and publish her first book.

“My goal was to publish two books by the end of the year. I wanted to capitalize on all the learning from my experience with writing my first book,” Cervantes-Espinoza said. Using the same illustrator and following the same process, Cervantes-Espinoza completed her second book “Christmas Time A-Z con Rosita!” with a turnaround time of only a week and a half following her first release.

“Open your Google Docs, jot down your ideas, and share them with people,” is Cervantes-Espinoza’s word of advice for students and teachers who want to publish their own work. She shares that sometimes people tend to wait to show their work to others until it is perfected. However, she advises against that method because reaching out has helped her writing process tremendously.

“Don’t let anything stop you; take your ideas and put them in front of people. It won’t be easy, but don’t let that frustrate you, ¡echale ganas!” Cervantes-Espinoza said.