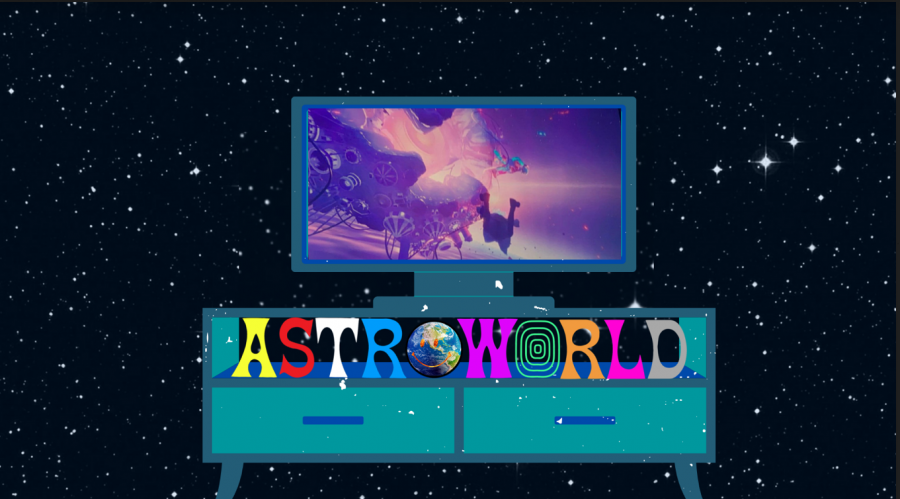 Scott’s virtual concert was exclusively on the video game Fortnite with five different showings. The rapper made sure to give his fans multiple “tour dates” and showtimes to choose from so that everyone around the globe had the opportunity to tune in.

During the nine minutes, some of Scott’s hits were featured including Stargazing, Goosebumps, and Highest in the Room. It ended with a snippet of his new single “The Scotts” featuring his favorite rapper Kid Cudi, Scott Mescudi.

Scott was also live on Instagram during the release of the song with his daughter Stormi. Fans from all over the world were able to tune in to witness his virtual concert and see the rapper’s reaction as his new track played.

Shortly after the concert, “The Scotts” was available on Spotify and other streaming services. Cactus Jack, Travis Scott’s record label, also released merchandise on their website. You can purchase clothes, figurines, and the song cover for “The Scotts” which was created by Kaws.

Scott has collaborated with his favorite artist Kid Cudi on previous projects. However, the duo did not disappoint with their record breaking new track. The track made references to the rappers hits “Through the Late Night” and “Outside.”

Scott infamous for his outros and insanely catchy beats broke records on Spotify and Fortnite. According to Chart Data, “The Scotts” debuted number one on the global Spotify chart with 7.45 million streams. Fortnite also released a statement saying that the virtual concert attracted more than 12 million viewers.

A twitter message from Travis to his fans on the day of the event thanked them for the immense amount of support he received. In all caps the rapper tweeted, “HONESTLY TODAY WAS ONE OF THE MOST INSPIRING DAYS. LOVE EVERY SINGLE ONE OF YOU GUYS. AND I KNOW TIMES ARE WEIRD FOR US. BUT FOR ONE MOMENT TO BE ABLE TO HAVE THE RAGERS TO RAGE WHEREVER YOU ARE IS AMAZING…”

Overall the concert was a solid 11/10 and everyone should take nine minutes out their day to watch it. The graphics along with the music are insanely beautiful that one could watch it more than once and notice something different each time. Dare I say “It’s lit!”