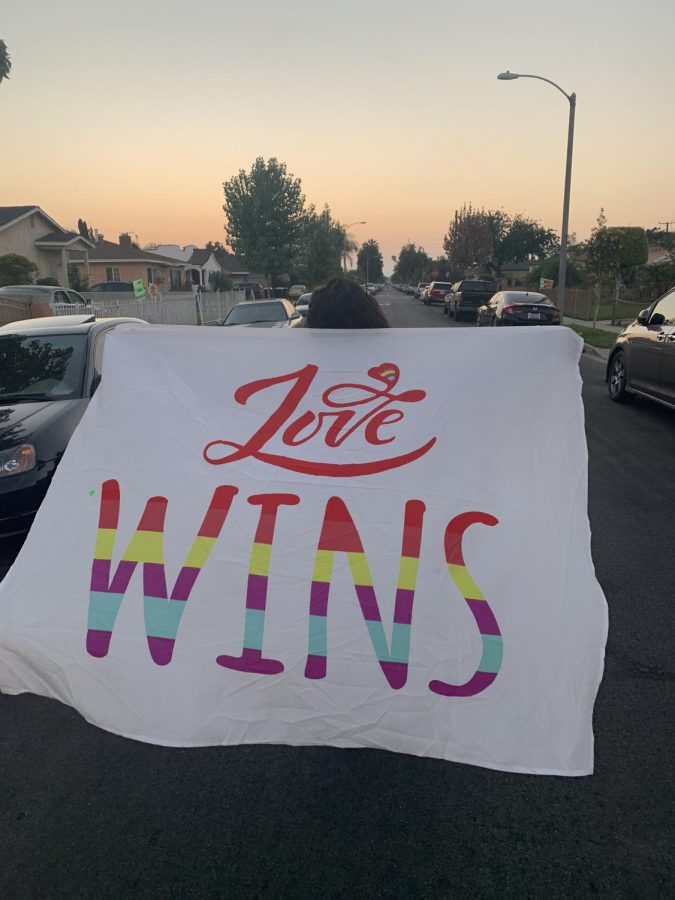 LOVE WINS-A world that Ruth Bader Ginsburg wanted to live in, where love and equality are superior than anything else. For 27 years Bader fought for what she believed in, which was the rights of others. She emphasized that all the world needs is a little bit of love for everyone to be happy. "No matter what gender or race you were, she believed in equality for all," an anonymous student stated.

Most know her as Ruth Bader Ginsburg, some may even know her as the Notorious RBG, but ultimately she is the driven, argumentative Joan Ruth Bader.
She was dedicated to ending the issue of gender inequality. She, herself had experienced gender inequality attending Harvard law, being one of nine women in a class of 500 students, according to Oyez.org.
As a volunteer attorney, she was appointed to the Supreme Court of the United States by President Bill Clinton. This is where she greatly started helping the different communities and attempting to fix flaws in the system. The mystery question is, what will happen now that Ginsburg’s chair is empty?
Gender Inequality in the workplace was one of the main issues Ginsburg focused on. Unequal pay between men and women was a part of what she wanted to address, as she believed that men and women should receive the same amount of pay. A woman who was just as qualified as a male worker was paid less, due to her gender. “She herself lived a tough life and understood what the people faced,” Hillary Rubio-Ruiz, a junior, said. Ruiz believes that the Supreme Court Justice was driven by her own personal experiences with gender inequality.
Being an ally of the LGBTQ+ community, Ginsburg fought for equality and rights for the many members of this unique community. She was a participant in the rulings of important occasions, such as same-sex marriages. By being part of these rulings she was fighting for two causes that she believed in, which was same-gender marriage and as she was on those cases it was also appealing other states from passing discriminatory laws against gay people.
A case that Bader was involved in was Obergefell v. Hodges, 2015, which was the case that same-sex coupled sued their states for trying to ban same-sex marriages. She gave the voice to many, just by doing what she thought was correct such as fighting for the rights of LGBTQ couples. “Without her voice, we are pushed out of the conversation,” Lilia Garcia, a junior, said.
Now that her chair is empty, president Donald Trump has the given right to appoint whoever he wants to replace the seat that once belonged to Ginsburg. Whoever replaces this seat will be a member of the Republican party. Which will be left as 5 republicans and 3 democrats in the Supreme Court. The thought of this occurring has brought negative feelings towards many. Such as to those in the LGBTQ community because certain rights that they have been, will be taken away. “The political circumstances and consequences of her death will be significant and are still unfolding,” said Psychology and Government teacher Ms. Mathis-Arsalan.
Having somebody in Guinsurg’s seat that doesn’t support her same beliefs may bring many changes, especially to women and members of the LGBTQ+ community.
Ginsburg fought for women to have the ability to have control over their own bodies. Meaning that they were able to have the access to various things such as oral contraceptives, abortions, and the right to bodily privacy. This not only affects women but also affects trans people, gender nonconforming, nonbinary people, and just anybody seeking reproductive health care, which is something that can change the lives of many greatly.
“Her death is heartbreaking,” said an anonymous student knowing that drastic changes may occur. Many are left with nothing but hope so things won’t change drastically.
Until her very last breath, she wished for the world to become a place where there was nothing but fairness and justice. Ruth Bader Ginsburg left the world with many great actions and words, “The state controlling a woman would mean denying her full autonomy and full equality”