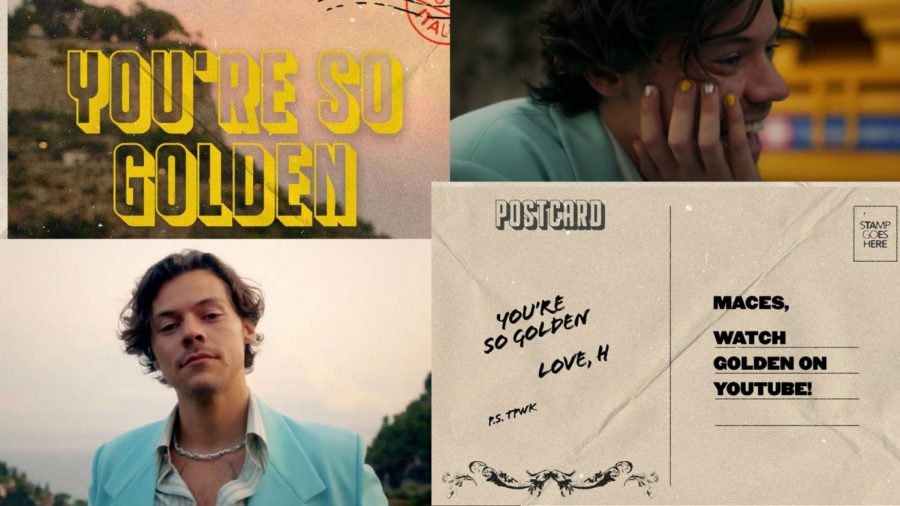 GOLDEN LOOKS- Harry Styles wears a Gucci blazer and an Eliou beaded necklace in his newest music video. Styles admits that “Golden” is one of his favorite tunes from his Fine Line Album. “I used to drive to the studio, and it’s the perfect PCH [Pacific Coast Highway] song. It’s like driving down the coast is what the song is for,” Styles said.

After teasing fans with a sixteen-second trailer and customized postcards, Harry Styles has finally dropped his long awaited music video for his newest single “Golden.” This is his opening track from his Fine Line Album, released in December, 2019.

Harry Styles fans were in awe from the jaw-dropping views of Italy’s Almfai coast. In the video, Styles is seen running through the streets of Italy with white crochet Gucci gloves, S.S Daley trousers, and freshly painted nails.

Throughout the video, Styles is seen wearing multiple customs “Golden”’ necklaces from the Eliou brand. Eliou has renamed their necklace to the “Harry” and you can preorder a handmade piece today.

Stylist, Harry Lambert, was responsible for Styles’ many wardrobe changes, which range from shorts made of potato sacks to blazers in his signature shade of blue.

Directed by Gabe and Ben Tuner, this music video has already reached over 20 million views in the first two days of its release and #Golden began trending on Twitter. The video has also maintained its number one spot on Youtube’s trending videos chart.

In an interview with Apple Music’s Zane Lowe, Styles confesses that Golden is one of his favorite tracks from the Fine Line album. Styles tells Lowe, “I used to drive to the studio, and it’s the perfect PCH [Pacific Coast Highway] song. It’s like driving down the coast is what the song is for. It feels so Malibu to me.”

Fans speculate that this will be the end of the Fine Line era as it is the 5th single from his album following the music videos for “Watermelon Sugar,” “Adore You,” “Falling,” and “Lights Up.”

Along with the release of “Golden,” Styles also began filming in Los Angeles for his new movie Don’t Worry Darling. Directed by Olivia Wilde, Styles will take on the role of Jack after replacing Shia LaBeouf, who had a scheduling conflict.

Fans also got more news about Styles investing in a new music venue, Co-op Live, which will be located in Manchester, England. It is a 455 million dollar project expected to be the UK’s largest arena. Although Manchester is under strict COVID-19 regulations, the venue is expected to be ready by 2023.