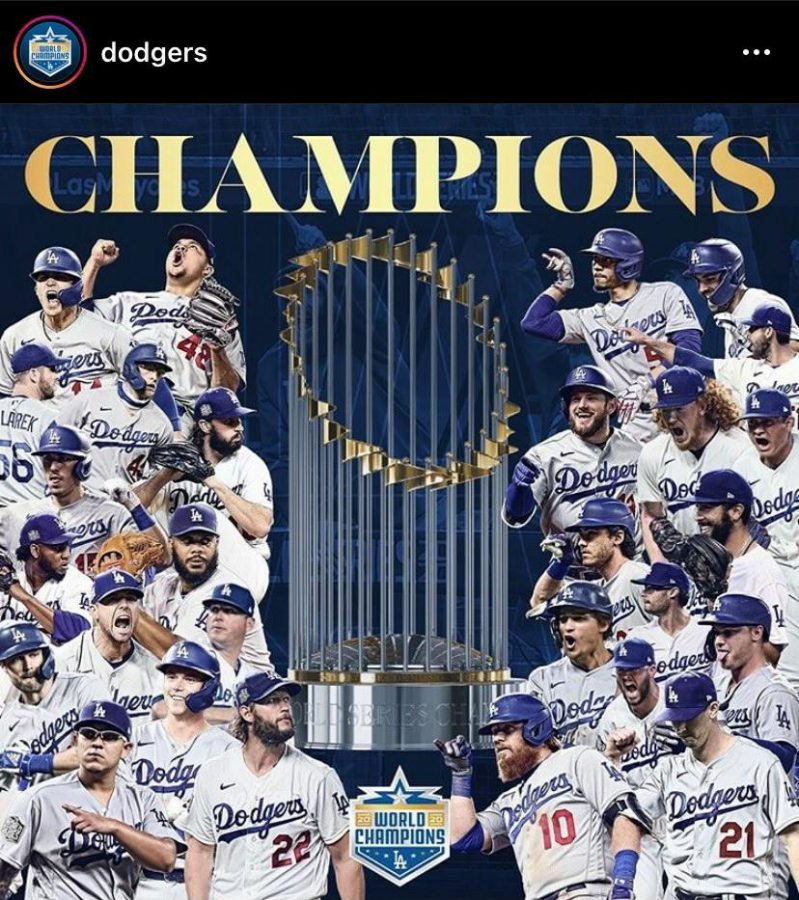 A post from the Dodgers on the night of their championship win. The Dodgers worked hard to make it to their 7th title after so many unsuccessful years.

On the evening of October 27, despite the pandemic and COVID going on in the world right now, the Dodgers won their 7th title. The last time they won a title was in 1988, which was their 6th World Series title. Dodgers fans have been waiting for years for a moment like this since their World Series title snub back in 2017, when they lost to the Houston Astros.

The Dodgers have done phenomenal this year in the regular season, making the 1st seed with a record of 43-17. They also had a phenomenal playoff run, sweeping the Milwaukee Brewers in the first round, and the San Diego Padres in the second round. Atlanta was the only team that gave them a hard time, but they finished that series 4-3, with Corey Seager winning the NLCS MVP award.

Finally facing the Tampa Bay Rays in the World Series, the Dodgers were able to come out victorious in that series, going 4-2. Corey Seager won the World Series MVP, adding on to his accolades with the Rookie of the Year award in 2016, and the NLCS MVP award this year.

“After being a Dodger fan my whole life.  I was excited that they won . This team has brought a little positivity to 2020,” said Myra Ornelas, step-mother to David Lopez Jr. 2020 this year has been awkward, crazy, and a whole cluster of confusions throughout the year. However, this World Series win has brought some sensation to many Dodgers fans, and maybe not so much with Tampa Bay fans, but someone has to be celebrating at the end of the day. This year, fans can appreciate sports for doing their absolute best in coming back to the world, and putting on a show for the many fans around the world.

“It is a good day to be an LA fan because the Lakers and Dodgers won their championships in the same year,” Chaly said. Due to COVID, both L.A. teams played at almost the same time for each of their seasons, and both won their respective championship titles for the city of Los Angeles.

Dodgers fans across the world can sleep in peace knowing that their team finally won a World Series title after so many years.