Can White People Experience Racism and its Negative Effects? 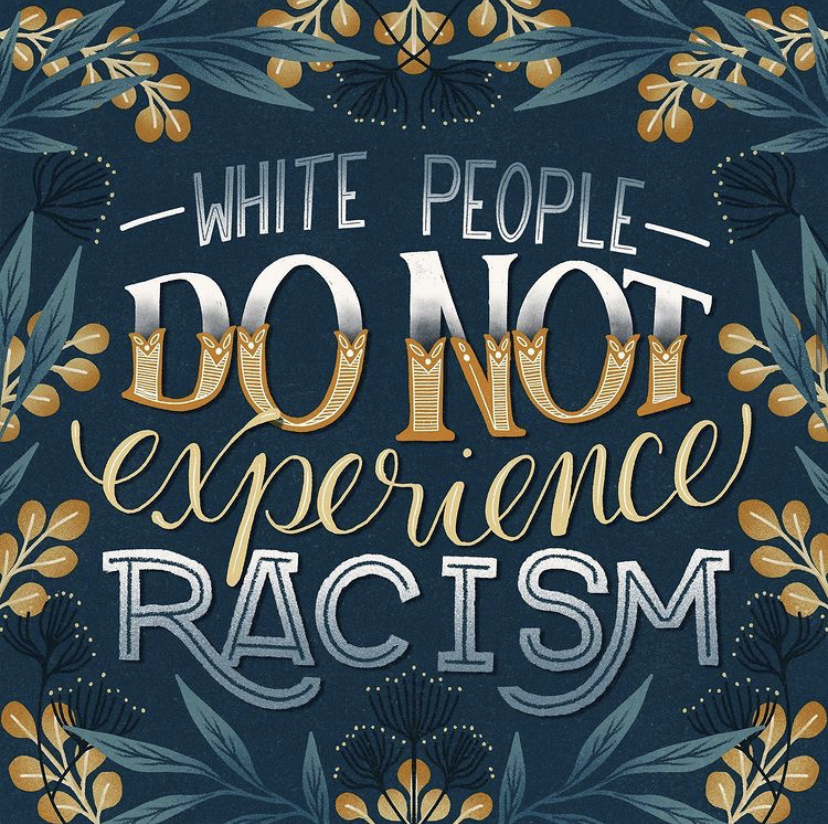 WHITE PEOPLE DO NOT EXPERIENCE RACISM- Racism is not only hatred towards a race, it is an act of discrimination that mainly affects minorities. This discrimination can affect minorities mentally, socially, and even physically, “The United States has a long legacy of racism that makes it difficult for people of color to receive quality health care, access affordable housing...,” according to Philip Lewis in their article titled, “What Is Reverse Racism"? Here's Why It Doesn't Actually Exist in the United States. (Digital art by @halfcaffdesigns on Instagram)

Racism is defined as discrimination directed at people due to their relationship in a certain ethnic or racial group, typically a minority group. However, can racism affect white people? The short answer is no, and here’s why.

Since the colonization of America, White people granted themselves privileges, claiming superiority above Black, Indigenous, and people of color, or BIPOC. This led to the traumatizing racism that BIPOC faces today. The effects of racism are not defined by simply discriminating against a certain racial group, they are institutionalized. “The United States has a long legacy of racism that makes it difficult for people of color to receive quality health care, access affordable housing, find stable employment and avoid getting wrapped up in the justice system,” according to Philip Lewis in their article titled, “What Is Reverse Racism”? Here’s Why It Doesn’t Actually Exist in the United States.

In order for White people to experience anything other than prejudice, an opinion that is not based on reason or actual experience, there would have to have been certain laws or systems implemented that systematically oppress White people. “I think everyone can experience prejudices including white people, but racism and discrimination are different than personal prejudices,” said Anon 1, “.

If anything, white people are impacted by classism more than any racism, discrimination, or prejudice.”

White people are less likely to be affected by many of the things that come with institutional racism. For example, “ Between 2005 and 2008, 80% of NYPD stops were of Black and Latinx. Only 10% of stops were of whites. 85 [percent] of those frisked were Black (frisked 50% of the time); only 8% were white (frisked 34% of the time),” according to an article posted on thenewprogressive.net. All groups including White people and Hispanic people are arrested by police, but officers are more likely to shoot and kill Black people that they are arresting than White people, according to henewprogressive.net. Data like this displays white privilege, as BIPOC are more likely to be affected by racial bias in the police force than White people.

On the opposing side, some may believe that racism does indeed have a negative effect on White people. “…I find the term “reverse racism” ridiculous. Racism is just racism, and it can be directed towards anyone and can affect every and any race. Why? Because any predisposed negative thoughts of a race is racism,” said Kelly Avila, a senior and the opinion editor of the Wolfpack Times,  “White LGBT people can face discrimination and not have been served justice,” except, White people that are a part of the LGBTQ+ community who face discrimination face it due to their sexual orientation, not their skin color.

“My uncle Richard, grew up in a predominantly Mexican/Latino neighborhood… He [was beaten] for being “light”,” Avila said. Her uncle being assaulted for being lighter than any other Latinos at his school displays discrimination between minorities. He was attacked due to his light skin color, this is an example of colorism, which is different from racism. Colorism is, “…discrimination in which people who are usually members of the same race are treated differently based on the social implications which come with the cultural meanings which are attached to skin color,” as stated in Wikipedia. Colorism within the BIPOC community, though disappointing, doesn’t support the idea that white people can experience racism.

Systemic racism in the police force also has a greater effect on BIPOC than on White Americans. The imprisonment rate for Black females is 1.8 times higher compared to White females, and the rate for Black males is 5.8 times higher than that of White males, according to Wikipedia. “White people don’t receive the same type of treatment as others would when in contact with police officers and are also less likely to be pulled over by a cop for suspicious behavior because of the bias from their skin color that’s been created,” said Ashley Jacobo, a senior. Racial bias can lead to more incarcerations of  BIPOC simply due to a false judgment of a human-based on their race. White people may also not face as much consequence for their actions, “I believe the white person would still be punished; however they would not be punished as severely, if at all. An example of this is the lynching of Emmett Till, in which case, the white murderers did not receive any punishments,” said Anon 2.

The effects that racism has on BIPOC is more than just hatred. Lives are lost due to racism, justice goes unserved, and BIPOC, as well as LGBTQ+ BIPOC, go unheard. It is impossible for White people to experience the negative effects of racism as they have been favored by the American government from the beginning. Prejudices that exist towards White people will never hurt them as much as racism hurts BIPOC, as laws that oppress white people have never been in place. However, there have been many laws that have been passed that oppress BIPOC, such as jim crow laws, which were laws that legalized racial segregation that originated after slavery was abolished with the 13th amendment. A current example of a law that affects BIPOC is president Donald Trumps’ shutdown of DACA, a program that had protected as much as  800,000 young undocumented immigrants brought to the US as children from deportation, according to CNN.

“White privilege does exist and a part of white privilege is to not be impacted by any racial hatred toward white people,” Anon 1, said.