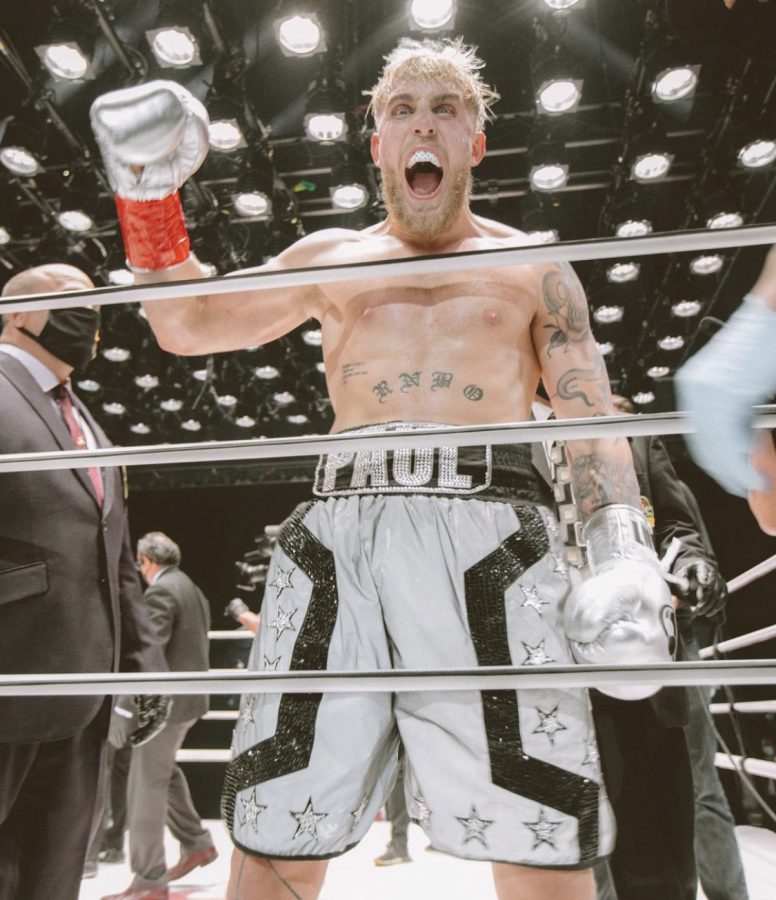 PAUL RISES OVER ROBINSON - Jake Paul reigns victorious over Nate Robinson with a second round knockout.“Once Jake landed the first knockdown, I knew it was a matter of time before he put him away for good,” Francisco Casillas said.

During the summer, rumors about Mike Tyson’s return to the ring spread. When a deal with Triller, a social media platform, announced the fight, a good undercard match came with it. Social media influencer, Jake Paul, was set to fight NBA and NFL veteran, Nate Robinson, in a professional boxing match.

After months of anticipation Saturday, November 28, fans met a new face in the world of boxing, Nate Robinson. Unlike Robinson, his opponent Jake Paul has been boxing as a professional since late January. Although Robinson had the athletic advantage going into the fight, given his NBA and NFL experience, he was predicted to lose the match. According to Forbes Magazine, Jake Paul had a -275 betting favorite the day of the fight making him the favorite to win going into the match.

With over a million people watching the fight live, the boxing match was set to begin. Robinson made his entrance first with a nonchalant tone while walking to the ring. By contrast, in his 3rd boxing match, Jake Paul came to the ring with confidence, on a mission to get into his opponent’s head. In an attempt to “troll” his opponent, Paul walked to the ring with the song, “Basketball” by Kurtis Blow.

With the ring walk over, it was time for it all to come down to six rounds of professional boxing. Both fighters touched gloves and all the training they had been doing for months led to this moment.

During the beginning of the first round, Robinson aggressively charged towards Paul but landed no effective punches. With Robinson being new to the sport, he started to wear himself out, which caused him to clinch during this round. In the beginning minutes of the first round, Jake Paul seemed to be getting a feel for who he was fighting, shown by his lack of punches. For the second minute of the round, both fighters landed some punches but none that really hurt each other. With 50 seconds left in the first round, Paul landed a crucial overhand right hook to Robinson’s left ear causing him to lay on the floor for some time before the round ended.

Based on the first round, it seemed clear what the outcome of the fight would be. Regardless, Robinson got back into the ring and stood tall against Paul at the beginning of the second round. The lack of experience Robinson had was made clear to viewers, as he showed a lack of defense leaving Paul pockets of space to land crucial punches. The beginning of the second round also included more clinching by Robinson. With one minute and 52 seconds left in this round, Jake landed a big right overhand punch to knock down Robinson once more. Robinson laid on the ring for a couple of seconds before getting up again to continue the second round. Paul eventually forces Robinson to a corner of the ring and hits a jab, uppercut, and a right hook to put the finishing touches on this match.

Ultimately, Robinson landed on the floor, and the referee declared the fight as a knockout victory for Jake Paul. Though he had won, Jake Paul seemed to be concerned for his opponent as Robinson laid on the floor for minutes. However, Robinson eventually was able to get back up on his feet and leave the ring.

As a professional boxer former MACES. alumni Francisco Casillas had some insightful comments on the fight. “I actually liked the fight, Jake Paul actually has proven to be a very decent boxer,” Casillas said. He respects Paul’s ability to train and focus like an actual boxer, and he likes the way he’s able to create a show for the fans. “Once Jake landed the first knockdown, I knew it was a matter of time before he put him away for good,” he said. Casillas was intrigued by Robinson’s outlandish style of boxing, but even more surprised by Paul’s perfect timing of punches.

With Robinson’s loss came many memes. People even took it as far as to create the #NateRobinsonChallenge, which consisted of laying on the floor in an attempt to mock his boxing loss.

Additionally, Paul had the internet buzzing all weekend with his post-fight interview. “This win meant a lot to me but there’s a long list of opponents that I want,” Paul said. Looking past this victory, he called out MMA Professional Fighter Connor McGregor in an attempt to get a contract for a fight soon. With social media influencers getting more and more engaged in the boxing world, boxing has been given newer and younger audiences.