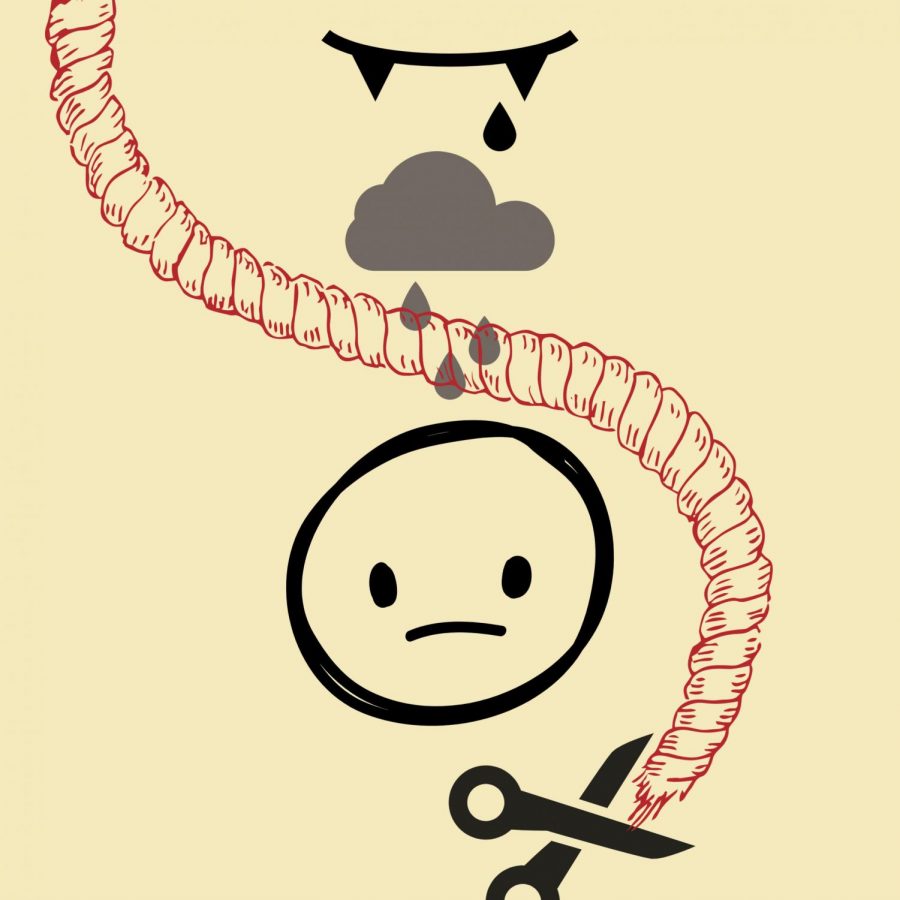 CUTTING TIES - People who are toxic can take the form of friends, romantic relationships, or even family. It can be difficult to spot toxic behaviors in loved ones and even harder to cut ties with them. “Having to let go of the thought of this person has probably been one of the hardest things I’ve had to do in my life,” said anonymous.

Toxicity can take the form of friends, family, or even romantic relationships. Often, it’s hard for someone to realize or leave a situation that has too much negativity, leaving them mentally exhausted. If not aware of the signs, a toxic relationship can rob someone of their motivation and happiness.

Identifying a person with toxic traits can be beneficial. According to an article in Forbes where ten types of toxic people are listed, “You can’t hope to distance yourself from toxic people until you first know who they are. The trick is to separate those who are annoying or simply difficult from those who are truly toxic.”

So, what exactly makes a toxic person? Forbes described toxic people as those who are unaware of the chaos they create while others derive pleasure from it. “I don’t believe there is one settled definition of a toxic person. A toxic person depends on who you are and what as a person you feel is toxic. Generally, a toxic person is someone who doesn’t add anything positive towards your well-being but makes you feel inferior, manipulates you, and stops your growth as a person. This is obviously shown in different types of people,” a senior who wished to remain anonymous said (anon 1).

Other students described a toxic person as someone who brings people down, tries to shape someone to their liking, or someone who hurts others mentally, emotionally and or physically; toxicity can also be more hidden, in forms of manipulation like blowing a situation out of proportion or even being overly possessive. Most of the time, it’s hard to spot behaviors that may be emotionally damaging but other times, it’s blatantly obvious.

When an average person thinks of someone toxic, their mind can likely jump to romantic relationships. “My ex-girlfriend was toxic. She’d text her exes, was controlling, never said sorry, and always wanted breaks. She wanted me by her side, but didn’t want the commitment,” Andres Flores, a senior feature editor for the Times said.

Romantic relationships can have their ups and downs and can have many red flags. Unfortunately, those red flags can turn green when love gets into the mix. “After certain situations, an argument would occur leaving me destroyed because I truly ‘fell in love’. I’d cry and beg until I was able to fix the situation and he and I would go back to normal. He was insensitive toward my feelings,” an anonymous senior said (anon 2).

Being in a toxic relationship isn’t always the other person texting their exes, lacking the commitment, finding reasons to argue, and lack of effort, but it’s still equally as damaging as dismissing a significant other’s feelings. For example, “I don’t think I ever realized I was in a toxic relationship due to blindness of the moment. But looking back on it I could see parts of it. All I put in to keep us together with the large [physical] distance between us only for it to be brushed off as me caring too much. I would go out of my way to make it the best I could, and I would get none of that in return. There was always something happening that I wasn’t told of and I knew she lied to me. I felt she had reason then… or at least that’s what I told myself,” Maximiliano Espinoza, a senior, said.

While romantic relationships can be an immediate connection to toxicity, familial toxicity is less talked about. Even the word “family” can bring up a bunch of emotions, negative or positive. Yes, romantic partnerships can destroy someone mentally, but so can familial ones. One may even argue that toxicity within family members can have more deep-rooted trauma.

Toxic family environments can be pretty hard to spot when having endured it for a lifetime. As someone grows older and experiences new things, their views can change and they can reflect on the treatment they’ve received. “I realized I was in a toxic household when one of my friends told me that a family member finding ways to bring me down wasn’t normal. Like, when I would wear a certain outfit I liked, the family member would tell me I looked like a ‘slut’ or ‘unacceptable’. And when they’re upset they proceed to blame it on me and say it’s my fault and tell me that I’m a disappointment,” Brianna Heredia, a senior, said.

Being talked down upon for not meeting a certain standard can have long-lasting negative effects. Obviously, a family member might not agree with choices or words. However, love and respect are essential, and not just in familial relationships. “My family member’s words and actions affect my behavior because I feel like I can’t spend time with them since they’re like a ticking time bomb waiting to explode when I do or say something they don’t like,” said Heredia.

Sometimes being called derogatory terms or talked down to isn’t all there is to it. “I come from a toxic family environment where I have to isolate myself for my own good,” anon 1 said. “My family has always been there for me, so I never saw them as toxic until I analyzed situations. My parents have never owned up to any abusive behavior they’ve done, but instead manipulated me into thinking I endured that abuse because I ‘asked for it’. They were very strict and didn’t ever let me make friends or even develop my own opinions. For example, last year during the BLM movement I started to talk to my parents about it and I was completely gaslit.”

That’s when she realized if she couldn’t speak about her opinions, her relationship with her parents was unhealthy. However, just because there’s a fallout due to unhealthy behavior, doesn’t mean it’ll continue. Sometimes people work on themselves and recognize certain behaviors as toxic. “Months later, my parents realized their wrongs and let me back in and we settled boundaries at home,” said anon 1.

Toxic friendships can take the form of any of the personal experiences talked about above. Gaslighting is very common amongst toxic friendships and familial relationships. According to a Goodtherapy article, gaslighting is a type of emotional abuse where “Someone who is gaslighting will try to make a targeted person doubt their perception of reality. The gaslighter may convince the target that their memories are wrong or that they are overreacting to an event. The abuser may then present their own thoughts and feelings as ‘the real truth.’”

It’s evident that gaslighting was at play and everyone can be considered a victim of emotional and mental abuse. From these different and personal accounts, here is a small list of red flags:

Person doesn’t take accountability and won’t apologize
Wants a situation to go their way, especially in an argument
Argues/gets angry and directs it at the other person in order for them to feel bad and try to reconcile
Easily angry
Doesn’t communicate at all, hides things, or lies
Disregarding other person’s emotions by brushing them off, or telling them they’re too emotional/overreacting
Ignores the other person’s boundaries
Makes a person feel like the villain and takes on a victim role
Needs other person to chase after them for “forgiveness”
Shaming someone for something they enjoy or name-calling
Second chances = repeated patterns behavior
Person makes others feel drained or exhausted
Gaslighting

In order to let go of someone toxic, building confidence within oneself to let go or to cut said person off takes time. According to a lifehack article, “Recognize the red flags, set boundaries, invest in yourself, and know when forgiveness is possible…If a person is worthwhile, they will prove themselves through their actions, not their words.”

Sometimes a person isn’t going to prove themselves, though. That creates a whole different scenario, a harder one. Cutting ties with someone that is loved and deeply cared for can be one of the most difficult choices in life. “I was very attached to my ex. Having to let go of the thought of this person had probably been one of the hardest things I’ve had to do in my life. I was able to overcome the attachment to him by accepting the fact that he wasn’t going to be a part of my life anymore and no good came from being with him. Another big step can be trying to love yourself a little more because when you realize that you’re the only one going through what you’re going through, you’ll be more considerate of yourself. And the most important thing to do is [to] validate your own feelings,” another student who wished to remain anonymous said (anon 2).

Learning to grow more comfortable with oneself is important, because it makes setting specific boundaries easier. “These situations are not easy to deal with and there is not one specific way to deal with toxicity. I know people that are upfront and that can straight up tell others they’re toxic and that they can’t continue said relationship. I give my respect to those people, but I, for one, can not relate. From my personal experience, I had to set boundaries and show that I couldn’t handle the toxic environment anymore in order to continue the relationship… but this was my parents, so it may not apply for every situation. The ideal thing would be to begin by putting yourself first, talk to them about said behavior, offer compassion. You aren’t there to fix them, say no if you must, and remember you are not at fault for someone else’s behavior,” said anon 1.

While communicating is an option, slowly letting go of them is another choice. “Tell them, and if they don’t fix their issues, let it drift off, let time take them away like shells on a beach. Metaphorically take that shell, smash it, burn it to a crisp, and throw its ashes back into the ocean,” Espinoza said.

If you or someone you know is an abusive household please contact: Childhelp National Abuse Hotline