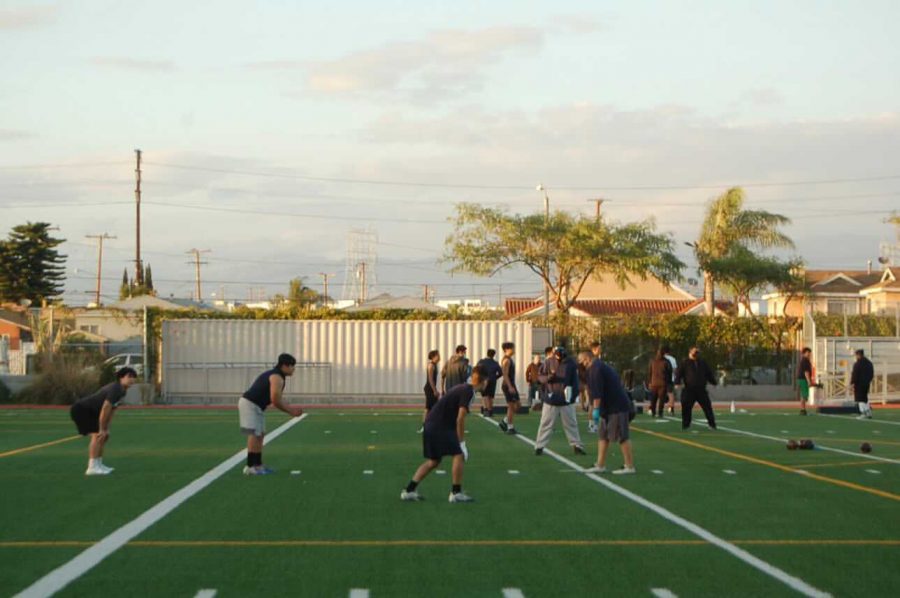 BACK IN ACTION - Student athletes are back on the field and ready for a potential season. Football one of the first sports to come back is set to play season games soon. “I’m very excited to be back, even if it’s just for one game,” Kevin Galvez, a senior football player, said.

March 2020 was a hard month for student-athletes in our school district, LAUSD. Because of the spread of  COVID-19, public health restrictions put their sports on pause. Fast forward a year and now students-athletes are back in school training for a potential season.

Late last month, the district began a plan to bring back high school athletes to the field. As a result, conditioning has begun. Now heading into April, some athletes are getting ready for a potential season. “I’m very excited to be back, even if it’s just for one game,” Kevin Galvez, a senior football player, said. He understands things can change unexpectedly due to COVID-19, but he is hopeful to at least get on the field with his teammates  one last time.

One of Galvez’s teammates, Sebastian Ocegueda, a sophomore on the football team, is also eager to get back on the field with his teammates—even if it means they’re playing a shorter season. “I think it would be really cool to play, I think we’ll have a lot of fun,” Ocegueda said. Though both athletes are unsure how the season will play out this year, they are eager to compete.

Another sport that has returned to action is Girl’s Soccer. Like most other sports, they were also affected by the pandemic. Similar to football, they have begun conditioning but have released no schedule for games. Though they have no set dates to compete, team members yearn to condition. “Though there won’t be people in attendance at games, I feel very happy that we could potentially have a season,” Daniela Navarrete, a senior soccer player, said. She has  mixed emotions about a potential season because fans will be unable to attend games.

Though the athletes are happy to be back in conditioning, some of them face challenges because of the pandemic. One of the biggest obstacles comes in the form of loss of conditioning. “I feel a bit out of shape, due to the fact that I didn’t do much cardio during the pause of sports,” Galvez said. Like Galvez, most athletes were unable to go outside, run, or access gyms to workout during the pandemic. “It’s been almost a year since the pandemic started and I feel out of shape, I’ve become slow,” Navarrete said. Although she feels unfit, conditioning will help her get back in shape.

In its third week, sports conditioning is giving athletes hope for a potential season in their respective sport. To check out the football team’s upcoming game schedule, follow @macesfootball.