Wake up Maywood: The Police is not equipped to serve mental-health related calls 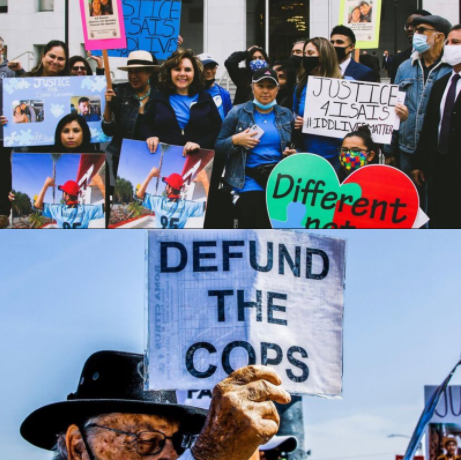 JUSTICE FOR ISAIAS CERVANTES, DEFUND THE COPS - After non-stop police brutality cases in the United States, Maywood and Cudahy community members experience a case closer than expected after Isaias Cervantes, a 25-year-old man with Autism was shot by Los Angeles sheriffs in his own home. Tragedies like the one the Cervantes family experienced due to police intervention not only show that cops are incapable of properly handling mental health situations, but that they should also be defunded in order to invest in proper mental health resources for cities all over the United States. “...Historically, the sheriff uses brute force and they don't have the sensitivity or the training to interact with anyone who has anyone who has a sort of mental health [issue]. I don't think they know how to de-escalate any situation, I think they just escalate,” said Juliana Lacoste, a freelance photographer and activist based in Los Angeles county.

When dialing 911, a person normally expects to receive help from a “well” trained officer. However, police support is not too visible when it comes to mental-illness-related calls in black and brown communities.

The lack of good policing in these communities was displayed by Los Angeles Sheriff deputies in the City of Cudahy on March 31, after Isaias Cervantes, a 25-year-old man with Autism, was shot in the back.

According to an article published in the Los Angeles Times, “Family of autistic man says deputies were warned of his disabilities before shooting.” The article also describes that the officers’ encounter with Cervantes only escalated the situation, leading to Cervantes receiving a spinal cord injury and a punctured lung. The severity of these injuries could possibly leave him paralyzed.

After situations like these, it becomes more and more apparent that officers are not fit to respond to any mental health-related calls, as they only cause more harm. “People with an untreated mental illness are 16 times more likely to be killed during a police encounter than other people stopped or approached by police… That risk is compounded for people of color, with Black and brown men being [two and a half]  times more likely to die in a police encounter than white men,” according to an article published on cityandstateny.com, a media organization dedicated to covering New York’s local and state politics and policy.

In order to see a change in the United States police system, communities must be willing to see more dedication towards mental health resources and less police action. “As a council member, I have to take in the needs and wants of everybody. In terms of policing, the majority of Maywood would not like to see the city without police. I personally can not make a decision for five to ten people when there are about 30,000 people in Maywood…They’re not ready to see the city without policing,” said Maywood Mayor Pro Tem and MACES intervention coordinator, Herber A. Marquez. Residents of the city of Maywood and Cudahy, despite what they’ve witnessed within the community officers, which includes corruption and abuse of power, do not wish to see fewer officers patrolling the streets.

If city residents are not willing to invest more in mental health resources, situations like Cervantes’ will only continue to occur. “If we were to instead invest in preventative programs and not have [officers] even come out to some of the 911 calls… like not the ones related to mental health, not the ones related to housing or lack of housing, we would be in better hands,” said Cudahy city council member, teacher, and activist, Daisy Lomeli.

Though it may seem like a difficult battle towards mental health resources and police abolition, there are many things residents can do to help the fight towards a healthier future. “They could reach out to the district attorney and have him be aware of the case. There are so many cases of officers shooting in LA county. Put pressure on the city and the District Attorney to recognize this case and for them to be accountable… call, tweet, write directly, have them be aware that the public knows about this situation and cares. There needs to be more public outcry,” said Juliana Lacoste, a freelance photographer, and activist in Los Angeles county.