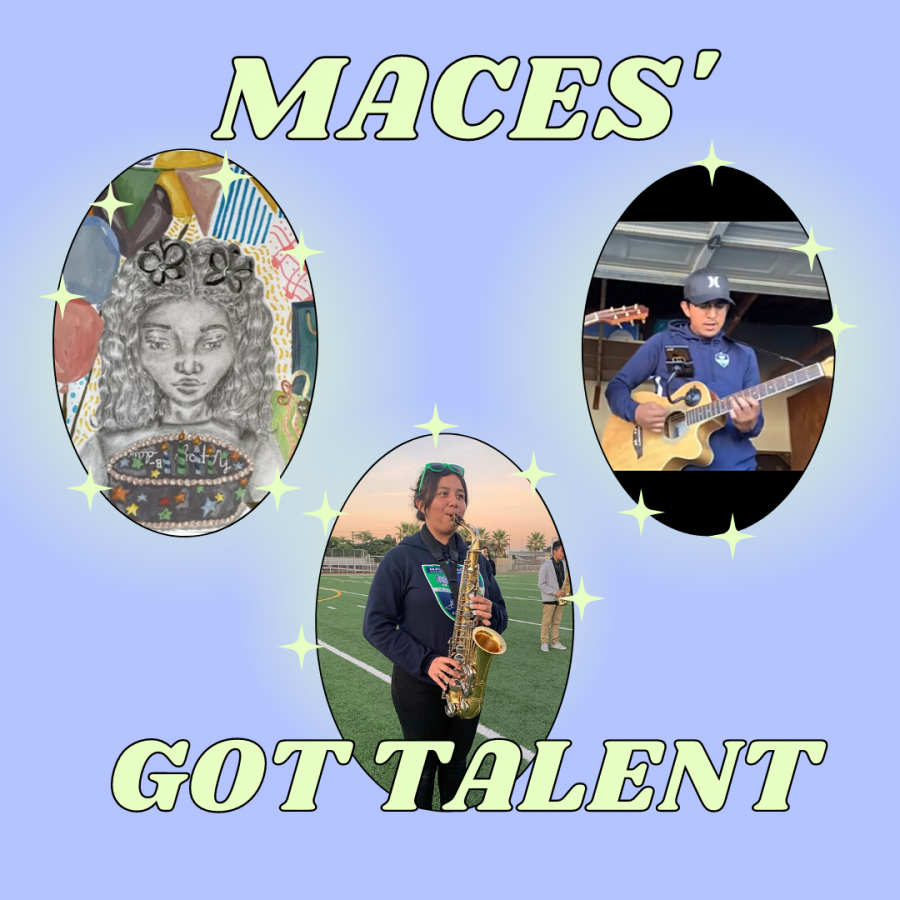 MACES, HOME TO TALENTED STUDENTS - Through it’s first four years MACES’ students have indeed proved they “Got Talent!” “In band, my biggest inspiration is the band director and music teacher herself, Ms. Rincon. Other than being an amazing music teacher and band director, she is a great person,” Elizabeth Arroyo, a junior said.

Talent comes in many shapes and forms. Different types of art like music and drawing are a way for people to express themselves. Through it’s first four years MACES’ students have indeed proved they “Got Talent!”

Matthew Sanabria, a junior, recalls his first encounter with music happening at a young age. “I first started with music at 10 years old. I would sing in the shower where no one could listen,” Sanabria said. As time progressed, he began to expand his music taste. By listening to different artists and different genres, he started to fall in love with the art form. “As I listened to more and more music, it started becoming a big part of my life and it became something I loved dearly,” he said. Though he fell in love with music at an early age, it wasn’t until ninth grade that he realized he had a passion and talent for singing. “Ninth grade [was when] I began to sing publicly. This same year, I joined a group with some friends that had been in one before,” Sanabria said. Now as a junior, he plays gigs with Grupo SG, his group. He hopes to soon make it big and see where singing can take him later in his life.

Elizabeth Arroyo, a junior, got into music during eighth grade because she joined the MACES  band class. “It was the first year MACES had opened and it was the first time I had ever taken a music class,” Arroyo said. She remembers being a beginner amongst a whole sea of experienced high school students; however, she was still very eager to learn. At first, she began playing the saxophone and now—a few years later—she plays three instruments including the alto saxophone, tenor saxophone and xylophone. With experience and time, she has also gained leadership roles in the school band. “The year the first band president (Susie) graduated, she and the director of the band (Ms. Rincon) had asked if I was interested in being band president,” Arroyo said. In just her sophomore year, Arroyo became band president and just a year later as a junior, she became drum major. “In band, my biggest inspiration is the band director and music teacher herself, Ms. Rincon. Other than being an amazing music teacher and band director, she is a great person,” she  said. When it comes to music, Arroyo sees Ms. Rincon as the biggest inspiration. Arroyo admires the kindness and support she gives to all her students, whether it be music related or not.

At a young age, Diana Oliva, a senior, began to discover a love for drawing. As a child, she would see her sister’s boyfriend drawing and painting and would ask him to teach her. “He taught me the basics of drawing such as drawing simple landscapes,” Oliva said. However, learning the basics wasn’t enough, so she took her  learning into her own hands. “As I grew, the want of ‘perfection’ helped me gain skills to build on what I had learned,” Oliva said. She would watch Youtube tutorials until she developed enough confidence to create her own pieces. Though she is self-taught, she is still grateful for the feedback that Ms. Hanson and Ms. Cruz give her on her art. Oliva recently received the 2021 Northrop Grumman MESA Scholarship for Engineers. Though she will be going into the STEM field in college, she will be minoring in Studio Art to further her talent of drawing.