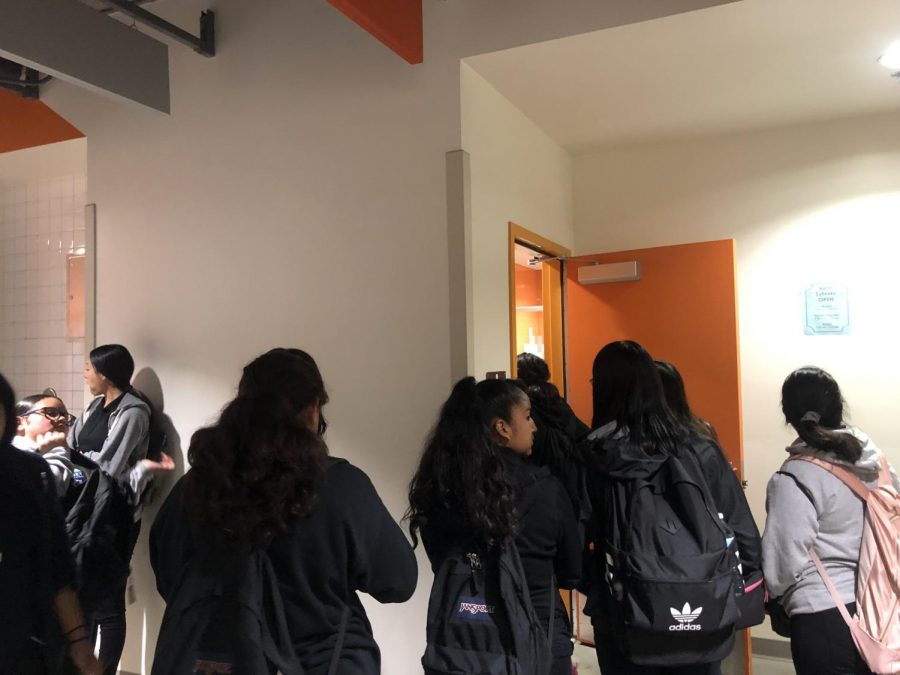 “Why is only one restroom open when we have so many?” asks Linzday Hernandez, a 6th grader. It is a common question asked by many students as they wait in the long lines for the restroom.

There are 11 restrooms available to students, but only one restroom is unlocked on each floor during class and two restrooms are open during lunch. With about 1,400 students on campus, how can teachers and administrators expect students to get to class on time and stay there without interruption to use the restroom?

Micheal Marin, a junior, said that the boy’s restroom is always packed during lunch and that he avoids the restrooms during passing periods to avoid being late. As many students also stated, he believes that opening more restrooms would help relieve the waiting times and be beneficial for tardiness. Lesly Ayala, a senior, said that she avoids restrooms, especially during the passing period to avoid being tardy as it can affect her eligibility to graduate. Ayala said, “and the worst part is that it’s always the girl’s line that is the longest.”

And just like Ayala, many other girls feel this way. The article, “Scientists Have Figured Out Why The Women’s Restroom Line Is Always Longer Than The Men’s” by Kenza Moller, states that the lines are longer because women’s stalls take up more space in the restroom than urinals do. The obvious solution to solving this restroom dilemma and the tardiness issue is to open up more restrooms.

However, this is not in the best interest of student’s safety according to Principal Duran. He said, “When we have so many restrooms open, students use it to vape and for alcohol.” This is understandable that with the limited supervision available it leads to fewer restrooms being available. Even the hallway supervisor Ms. Shirley Grimaldo feels that opening more restrooms would make her job more difficult, because hallway supervision is based solely on her, and since she is only able to check into the girl’s restroom, it adds even more difficulty. But she does empathize with the students as she fears that the long lines might lead to someone having an accident.

Even teachers find that the restrooms do pose an issue as students come tardily to class or ask to leave the class in order to avoid being late. Chemistry and Physics teacher, Ms. Kim Perfecto, said that the available restrooms are good enough but the real issue is that students aren’t as informed as they should be on which restrooms to go to and whether they are open or closed.

AP World History and Government teacher, Mr. David Nolasco sides with the students as he said, “I don’t think there should be restroom lines, there are plenty of restrooms in this school.” He finds that his students either walk into class tardy because they were in the restroom or that they will come to check in to his class and immediately ask if they can be excused to the restroom.

So what’s the simplest solution? Opening more restrooms is the obvious answer, but it seems that it is also up to the students to use the restrooms appropriately to avoid them being closed down again.