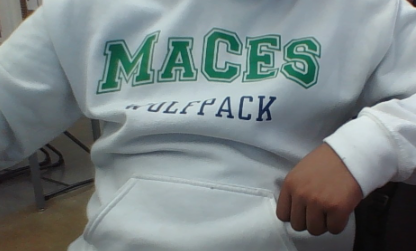 Why is there a strict uniform and sweatshirt policy that the students of MACES have to follow? Was it the school’s choice to enforce this policy or did the law of California have a say in this matter? Contrary to this question, Assistant Principal Jose Meza said, ¨Decisions are made by school leadership.¨ By leadership, this means that ASB, Associated Student Body,  gets the final say in this decision. I believe students should have more of an influence on this momentous decision instead of ASB deciding for them. They might have a different belief and feel as if they have no voice in this matter.

The students of MACES deserve to have a say in this decision. Being in ASB should not be the only way to be qualified to discuss and be part of this declaration. After all, it involves the students and the clothing they have to wear. According to Mr. Meza, the controverted policy is, ¨Khaki, navy blue, or black pants, navy blue or black polos and they have to be solid or with a MACES logo. No jeans.¨

There are numerous downsides to the uniform policy. One disadvantage is that uniforms can be expensive for clothing students don’t wear outside of school. Students also don’t get to express themselves through their choice and style of clothing. They might be enervated of wearing the same type of clothing every day and feel as if they have no individuality of their own.

Despite wearing uniforms, it does not disguise the fact that bullying is still occurring at schools. Anyhow, students can find other reasons to bully based on gender, racial ethnicity, and popularity.

Although producing disadvantages, the uniform policy has many compensations. One benefit is that by wearing uniforms, students don´t have to experience bullying, based on their clothing preferences. Also, by wearing uniforms, students won´t be singled out solely based on social-economic status. ¨So, kids that come from families that are more wealthy will stand out versus those who don´t,¨ Mr. Meza explained. If the uniform policy is not implemented, bullying statistics might increase as well.

Gangs would be less of an issue too. They wouldn´t associate themselves with a type of clothing such as baggy pants or ripped jeans. According to the MACES website, baggy pants or overly tight pants are out of the question. By having uniforms, this would increase safety on school campuses. It would be easy to identify someone who does not belong to the school based on their garments. In turn, this can lessen the rate of school shootings and other potential school-related catastrophes. Students can focus on their studies and not worry about becoming potential targets in violent acts.

Another issue with regular clothes could be money. The prices could be out of families’ price ranges. With uniforms, they can be handed down in families as long as they are taken care of. This is another way a family can save money if needed.

Lastly, kids don´t have to be stressed out when deciding what to wear to school. They can choose quickly and therefore lessen the rate of students who are late. Due to bullying, regarding uniforms, they might fake an illness so they do not have to go to school, which in turn drops the attendance rate at school. Uniforms are a controversial debate. What side would students take in this matter?