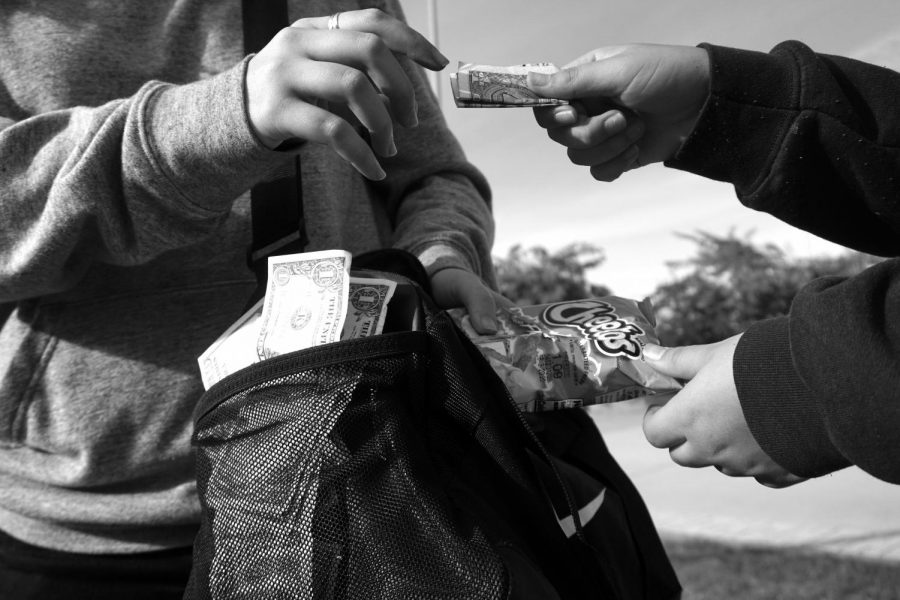 The student store has drastically dropped in sales as student snack dealers are on the rise. These are the clever high schoolers who refuse to quit their business, secretly selling goods across campus every day.

A senior snack seller, who asked to go by an alias, Cornelius, is a well known dealer amongst the seniors. “It all started since sixth grade,” he said.

Throughout his teenage years, Cornelius has gotten caught on school grounds, but as long as he makes money, the risk is worth it, averaging 150 dollars in sales each week. “Typically [faculty] take the money away, but I’m more comfortable with them taking my merch than my money,” said the senior. Although students as young as sixth grade attend MACES, Cornelius prefers selling to an older audience to reduce the risk of “snitching.” However, he has advice for the middle schoolers who do plan on buying from other students in the future. “Don’t buy from people [who] you don’t know,” he recommends. Cornelius wants students to be cautious of what they buy and who they buy it from, as he thinks it will ensure that students can know it is from someone with no intention of harming their health.

From the consumer’s perspective, Cornelius’ most regular customer since sophomore year, Manuel Espitia, isn’t afraid to buy from the secret sellers. “Students won’t sell bad things or else they’ll lose customers,” he said. He doesn’t believe there is any harm involved, especially since a seller’s intentions is to make money, not lose it. As he buys from students, Espitia is also a regular at the student store, but has not been entirely happy with past experiences. “I like what [they] sell, but not the line waiting,” he said. Since all grade levels are allowed to buy snacks from the student store, lines are long, and at times, frustrating.

Unlike Cornelius, some student sellers offer their snacks to all grade levels, increasing profit and demand. Another dealer, who asked to remain anonymous, comes to school with 30 chips, 15 sodas, and 16 tortas every day, claiming that he has never been caught by staff. “It’s better than selling drugs,” he laughs. This anonymous seller is known throughout the school, unsure of how so many people know about his business. On his best day, this seller could make about 120 dollars. “Sometimes [middle schoolers] just come and I don’t know who tells them,” he says, “….and teachers buy too.” Unexpectedly, some faculty prefer buying snacks from the student rather than confiscating the goods altogether, further proving how satisfied customers are.

Although beneficial for the sellers and their wallets, it is taking an effect on the student store. “The money from the student store goes into the student body fund. That benefits all students on campus,” Associated Student Body advisor, Julianne Cotta, said. Events such as dances that are available to all students can drastically become less enjoyable if the student store does not make enough money. This is a major concern for the advisor, since students are often complaining of the limited incentives offered at events.

“This decreases the athletic departments’ budgets too,” she adds. Since there are numerous sports, an even larger portion of the school is affected. Cotta hopes that students are aware of where they spend their money, and to keep in mind of the bigger picture. “I understand it’s a way to make money, but school is not the place,”  said the advisor. “If you know someone is selling, you can report it on the anonymous tip line.”

Whether or not the student store eventually increases in sales is entirely unknown, as well as the consequences that follow after. Although specific data regarding student store sales are unknown, a general analysis by its staff and Cotta ensure that there is a definite drop in income.  As for the unknown snack sellers, they do not plan on stopping their businesses any time soon.