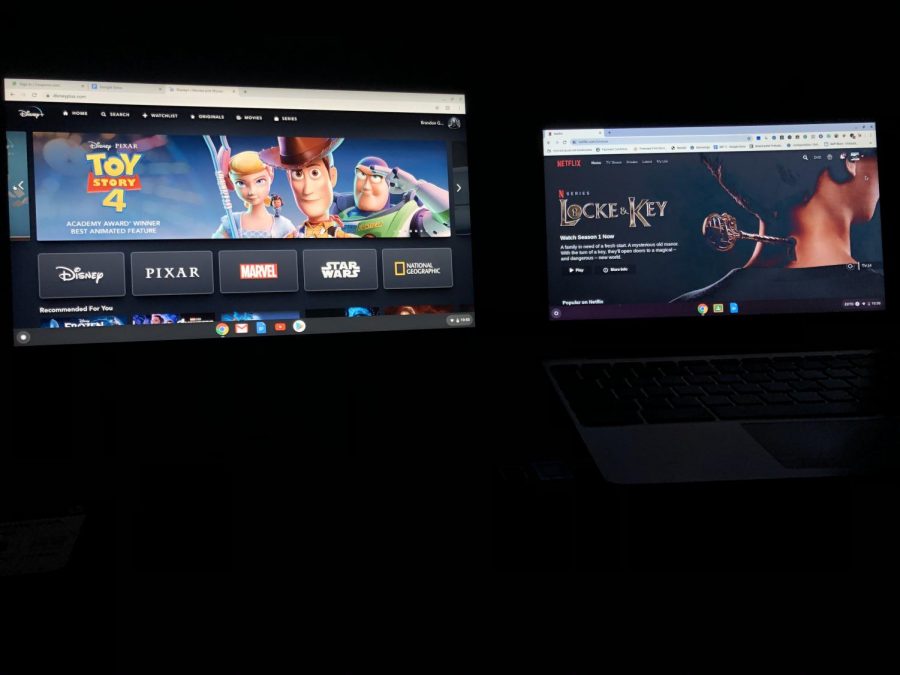 Disney vs. Goliath: The new kid on the block, competing with the experienced veteran.

With the launch of Disney +, subscribers have access to shows and movies that stir up feelings of nostalgia. However, Netflix still rises above with its vast library and a variety of genres.

The prices of both Disney + and Netflix are similar depending on which plan the subscriber chooses. Disney + offers a plan starting at $6.99 per month or $69.99 annually. This gives viewers access to all content in HD and up to seven accounts that can stream at once. On the other hand, Netflix’s standard deal starts at $9 a month, which only permits users to stream under one account.

Despite the higher prices, Netflix offers more for viewers to watch and caters to a larger demographic. “I feel the prices are fair for both because instead of going to the movie theatres, you can watch movies at home,” says, junior, Alexa Monarrez.

While Netflix does have a higher price compared to Disney +, Netflix’s library is much more extensive. Netflix offers popular shows such as Stranger Things, The Office, and Breaking Bad. Meanwhile, Disney + provides Disney Classics such as The Lion King, and new television series such as The Mandalorian. “In terms of the caliber of the content, I believe that Netflix is still where I would go to find really good stuff,” English teacher, Ms. Kuehl, said.

When asked about which streaming service rises over the other, most students and staff replied with Netflix. The decision came down to Netflix’s larger selection of movies and tv shows. Although Disney + does offer a nostalgic feeling, in the end, subscribers are limited to titles owned by Disney. The type of movies and shows offered by Netflix makes it the top pick since the streaming service offers both children shows and titles that an older demographic can enjoy. “I would choose Netflix because each month they add different movies. This keeps people more interested since there is new content,” junior, Alfredo Uribe, said.

Furthermore, a poll by The Wolfpack Times, reveals that 58 percent of people enjoy Netflix more than Disney +. “I still feel like Netflix is more popular. Disney + was popular when it came out, but it has died down already,” freshman, Leslie Castro, said.