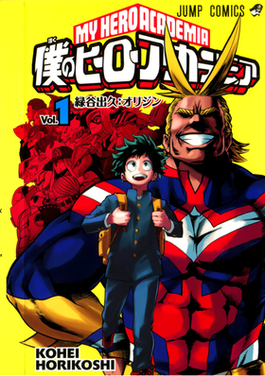 The My Hero Academia story revolves around the character of Izuku Midoriya who is aiming to become the number one hero and the symbol of peace. His journey is a long and hard one as he learns what it means to overcome both his shackles of admiring All Might, the number one hero and the symbol of peace too much, and his classmates, as he reaches for the top spot. “The story is a fun one because you are told that Midoriya reaches the number one spot and you then get interested to see how this nerdy quirky kid turns into someone everyone admires and respects,” Maximuz Cadena, a junior, said.

The former symbol of peace had both the skills and the personality. His quirk was uncomparable and his charisma made him even more likable. Everyone who wanted to become a hero looked up to him and his smile always calmed the room. Although many try to replicate All Might’s success, they come up short whether it be in terms of technique, lack of power, or lack of fandom. There are a variety of factors that make a person stand out and one of them is their skills or capabilities.

It is no secret that to earn someone’s trust, a person must show others what they’re capable of time and time again. Two of the stand out characters are Shoto Todoroki and Katsuki Bakugou. They both have amazing control over their quirks, but their personalities require lots of work. Bakugou gets furious almost instantaneously for the most minuscule of reasons while Todoroki rarely shows any emotion let alone any sign of happiness. With personalities like that they may not be the most calming people to be around, which puts them at a disadvantage in terms of mannerisms.

“An ideal hero is someone who’s done enough to always keep everyone safe and calm even when the odds aren’t in their favor,” Cesar Gomez, a junior, said. The number two hero, Endeavor, was considered to be miles of All Might in terms of hero ranking because of his cold personality. He was a hero which placed ease in the hearts of civilians, but the trust he gave dwindled in comparison to the trust civilians had in All Might. Midoriya does not possess the same flaw. He tries to replicate everything the symbol of peace stands for including his personality and never wavering smile. He does everything possible for people to see him as the next All Might.

My Hero Academia holds examples of character development along with the strong wills of heroes trying to stay true to their beliefs. Keeping your morals when your back is against the wall is a prime example of not only being a hero but a good person. The concept of heroes is a simple one to understand, but not as simple to imitate. A person can take a lot of inspiration from the actions on others especially when the actions are for the benefit of others.